Indian Military Mail During the WWI Era – Robert Gray, Livingston, NJ ** At the Clubhouse and via Zoom 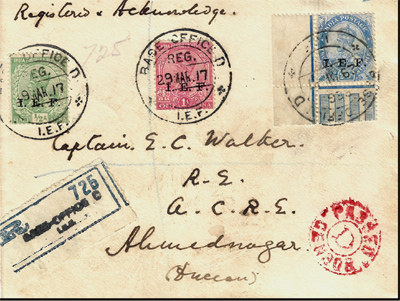 This WWI era registered and acknowledged cover was sent by a civilian in Mesopotamia (Iraq) to a Captain in the Royal Artillery at Ahmednagar India. The cover was cancelled at the Base Post Office for Force D using Indian Expeditionary Force, I.E.F. overprinted stamps and bears a registration label and a circular hand stamp PASSED BY CENSOR D, both applied at Basra.

Research
Published over 30 philatelic articles on India during WW I era
Mueller Award for best article in the American Philatelist for 2014: “Indian Army Postal Service in World War I”
Contributing author to the Smithsonian’s The Tenth Winton M. Blount Postal History Symposium: World War I and Its Immediate Aftermath, 2022.
Current Project: A series of articles on WWI postal censorship in India for the Civil Censorship Study Group Bulletin